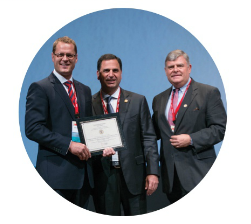 SUMMARY
Over the long term ACL reconstruction with the patellar tendon graft was associated with good clinical outcomes, but a high rate of contralateral ACL injury.

RESULTS
At 20 years after ACL reconstruction 31 patients had sustained another ACL injury, 8 to the index limb and 27 to the contralateral limb, including 3 who injured both the reconstructed and contralateral ACL. The mean IKDC score at 20 years was 86 and 50% of subjects reported regular participation in strenuous to very strenuous activities. Kneeling pain was present in 62%. Radiographic degenerative change was found in 60%. IKDC ligamentous examination was grade A in 82% and grade B in 16% of those without further ACL injury. Significant gender differences were apparent at 20 years after surgery. When compared to males, females had higher ACL graft survival at 20 years (83% v 97%, HR 7.1, p=0.06). However females also reported significantly poorer mean IKDC subjective score (90 v 83, p=0.03), more activity related pain (p=0.02), and swelling (p=0.05) and lower regular activity level (p=0.04) than males.

CONCLUSION
The incidence of further ACL injury 20 years after ACL reconstruction was high, and more commonly occurs in the contralateral ACL than the reconstructed ACL graft. Females demonstrate a trend towards lower rates of further ACL compared to males, this may be related to less participation in high risk sports due to symptomatic limitation. Kneeling pain remained a persistent symptom over 20 years. Radiographic osteoarthritis was evident in the majority of subjects but symptomatic osteoarthritic symptoms were rarely reported.

John J. Joyce Award
Sponsored by Smith & Nephew Inc.
In 1981, Dr. John J. Joyce III offered a monetary prize for the best arthroscopy paper read by an orthopaedic surgery resident or fellow during the Scientific Program of the 4th Congress of the International Arthroscopy Association in Rio de Janeiro. With characteristic generosity, he endowed a prize to be awarded at every IAA Congress thereafter. John Joyce created the award with the intention to stimulate and reward younger members who contribute high-quality data and presentations. Thus, orthopaedic residents and fellows, with a study related to arthroscopic treatment are encouraged to apply for this award.